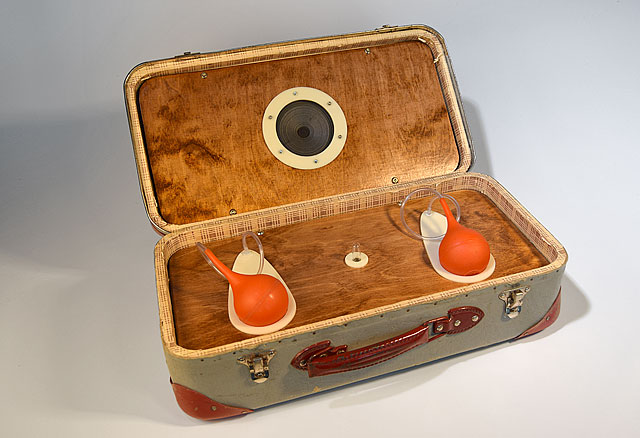 The Voice Pump is an experimental and affectively engaging interface for exploring affective qualities of voices as a way of relating to refugees in Denmark. In the wake of the ongoing refugee crisis, refugees are often referred to in the media and popular discourse in Denmark as a homogeneous group of non-individuals, attributed with general qualities and uniform motives. However, this is not the case at all; the refugees are a heterogeneous coming-together of individuals with different stories, cultural backgrounds and voices. With the Voice Pump, we want people to attune to this differential. Our primary aim, however, is not to engage directly with refugees stories on a level of content. Rather, we are trying to engage people affectively through an experimental interface allowing people to attune to refugees through affective interactions with voices, the qualities associated with these voices and the affective gesture involved when speaking a non-native language.

The Voice Pump experiment has been carried out under the heading of a larger interdisciplinary research project on Affects, Interfaces, Events funded by the Danish Independent Research Council (4180-00221) in a subproject that deals explicitly with the design of affectively engaging interfaces in relation to interactive sound design . Recently, Lottridge et al. have defined an affective interaction as any interaction that is coloured by an emotional experience. However, advances in affect theory and philosophy have also emphasized how affect is also central for understanding our attachments to each other and the world, moving affect from the individual into everyday affective attachments and social relations. Here, affect is seen as a constitutive force of human experience and larger social or social and societal formations.

In the design of the Voice Pump, we have explored how affectively engaging interfaces can enable thus offer conditions for affective interactions through the use of experimental conceptualized as interactions with concrete digital and interactive technologies on a micro-level that can catalyze new affective attachments on a macro-level. Importantly, this is not to be understood in any way as a form of affective engineering or an attempt to determine peoples actions in a given situation; rather, every event of interaction is unique and can only offer conditions particular conditions of emergence that cannot be fully determined in advance.
In affect theory, it has been shown how affect can be used to articulate the dynamics of situations involving high degrees of uncertainty, precarity or crisis. This guided our choice of context of intervention towards an extremely affectively saturated theme in the current political climate in Denmark  and on a global scale  namely the refugee crisis. From the outset, we wanted to explore ways in which we could create an affectively engaging interface, which would be able to change existing affective attachments between native Danes and refugees. Early on in the design process, we decided to explore the potential in creating an interactive sound installation that would let people listen to and interact with actual refugees voices using rubber pumps as interaction devices. By using rubber pumps, we wanted to explore the connection between controlled airflow and the spoken human voice, as seen in e.g.Wolfgang von Kempelens work from 1791, but using digital technologies.

In its current setup, the Voice Pump lets you pump up voice recordings of non-native Danish speakers reading out loud a page from an official Learn Danish textbook. Pressing the rubber pumps moves the recorded voices from low to normal to high pitch based on the airflow. You have to maintain a steady air pressure to hear the entire recording in a normal pitch, but you can also explore the low and high pitches to accentuate different affective qualities of the voices. Using the rubber pumps provides a novel form of interaction on a micro-level that aims to make people explore differently the recorded voices presented in the machine. This, we believe, might provide a different way of differentially attuning to the voices that have very different accents and affective qualities, thus reflecting the heterogeneous group of individuals covered behind the label refugee.

Jonas Fritsch, IT University of Copenhagen.
SenseLab, Montreal.
Ben Cahill for the photos.