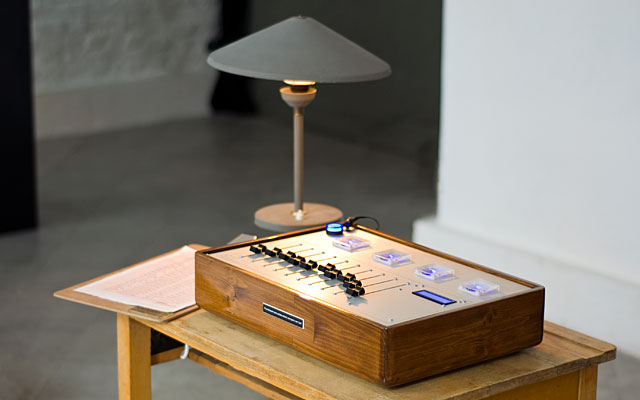 Statistical numbers are used as tools to manage the world. Tools not only give us the ability to solve tasks, but also form our understanding of these tasks. If the only tool you have is a hammer, you tend to see every problem as a nail. I meet statistical numbers almost every day; in the media, in the speeches of rulers and politicians, in finance, in business plans and in academic research. Statistics are made, chosen and juxtaposed to support particular beliefs and to substantiate arguments. Statistics are a way of looking at the world. Presented as a translucent window between me and the world  not to be looked at, only to be looked thru. In this exhibition I wish to draw attention to the tool, to scratch the glass and make the window visible.

OECDlab consists of three lab-instruments. On these instruments you can adjust parameters like percentage of women in parliament, distribution of income (the GINI index), military expenditure and others. Then you will see how your alterations are influencing other factors in society. Will lowering the gross national income change the freedom of the press? All interaction is based on real data supplied by OECD, the WorldBank and UN.

OECDlab takes inspiration from the title of the text Give Me a Laboratory and I will Raise the World by the French sociologist and anthropologist Bruno Latour. In this article Latour argues that laboratories are built to destabilize the difference between micro and macro levels and laboratories are sources of fresh politics and powers for modifying society.

OECDlab is not the control room of the world. OECDlab is a small laboratory for your experimentation. And  to quote Latour  a place where nothing special is produced.

Three instruments are at your disposal. They paraphrase the technical test-equipment from the physics department of most elementary schools. You may now turn the knobs of the OECDlab  and thus start a little, interesting game of survival. Manipulate different parameters to create combination of data. You can see the result of your interaction on the analogue and liquid crystal displays. All data are real data  about real countries and real people  dont forget that!
Your first challenge is mixing the spread and diversity of age groups in a population. The machine tells you when you find a combination that actually exists in a real country. At the same time, information about different statistical facts are shown about that country:

The second instrument in the OECDlab gives you the opportunity to manipulate demographical parameters  in the sense, how much money can I spend on military, without the freedom of the press is compromised?. You may turn large knobs on three panels.You may turn one knob at the time, and when the data resembles the data from an existing country, all instruments light up. In this interface the country remains anonymous, however. The questions raised are universal and essential, if you are to have a chance to raise the world  statistically, at least.

The third instrument gives you the chance to scroll through a wide range of different statistical values. It contains a GPS module, which makes the instrument site specific  you may only flip through statistical values from the country where the instrument is located. If you want to check out another country, you have to move the instrument, physically, to a location within that countrys borders. The situation is reversed, it seems: You are given the world, and now you have to reinvent the laboratory in each and every country in that world!